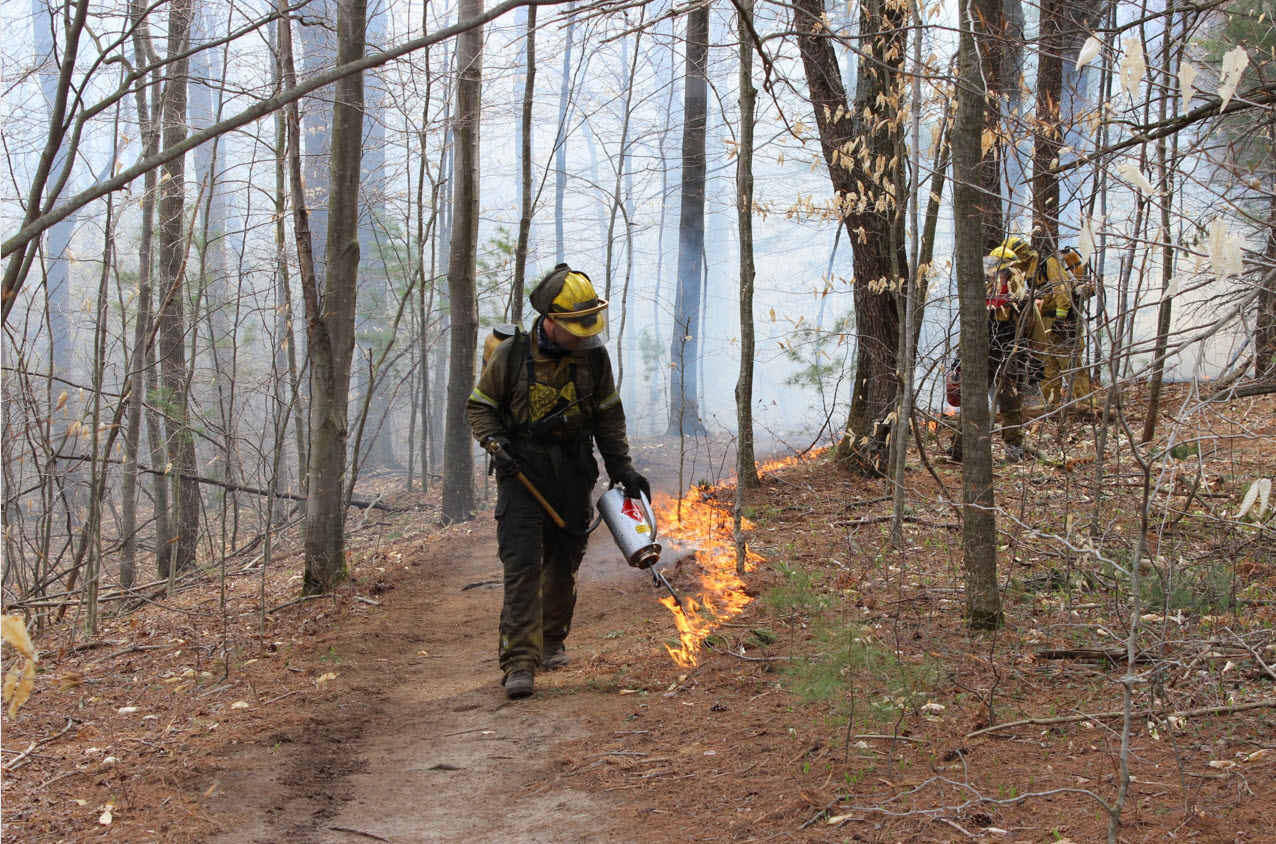 Ottawa County Parks has four prescribed fires, also known as controlled burns, planned for 2021. In general, the goal of these fires is to use a natural and once common occurrence to turn back the clock on a mature forest. This creates once abundant early forest habitat that has become uncommon. Using fire can also help to combat invasive plants while stimulating the seedbank.

Students who are training for their federal burn certificate through Grand Valley State University will be conducting research at Hiawatha Forest (in addition to many other areas across the state). Their research explores how burns affect the diversity of plant life when conducted in different seasons.

Ottawa County Parks & Recreation has an in-house team of certified burn crew members (two with national certifications and three with midwest certifications). We have also invested in safety equipment equivalent with what burn contractors would use. Our crew handles smaller burns with large burn breaks, like the Hemlock Crossing prairie. 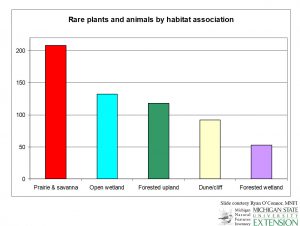 Across Michigan we have many fire-dependent ecosystems such as prairies and savannas and many of these ecosystems are almost entirely lost. In fact, Michigan has lost 99.98% of its savannas. This is of concern from a natural resources perspective because prairie/savannas host the largest number or rare species.

What is a prairie/savanna ecosystem?

Prairie and oak savannas have a number of different terms associated with them. Think of a a spectrum with prairies on one end and an oak dominated forest on the other. An oak savanna is in the middle of that spectrum (30%-60% canopy cover). 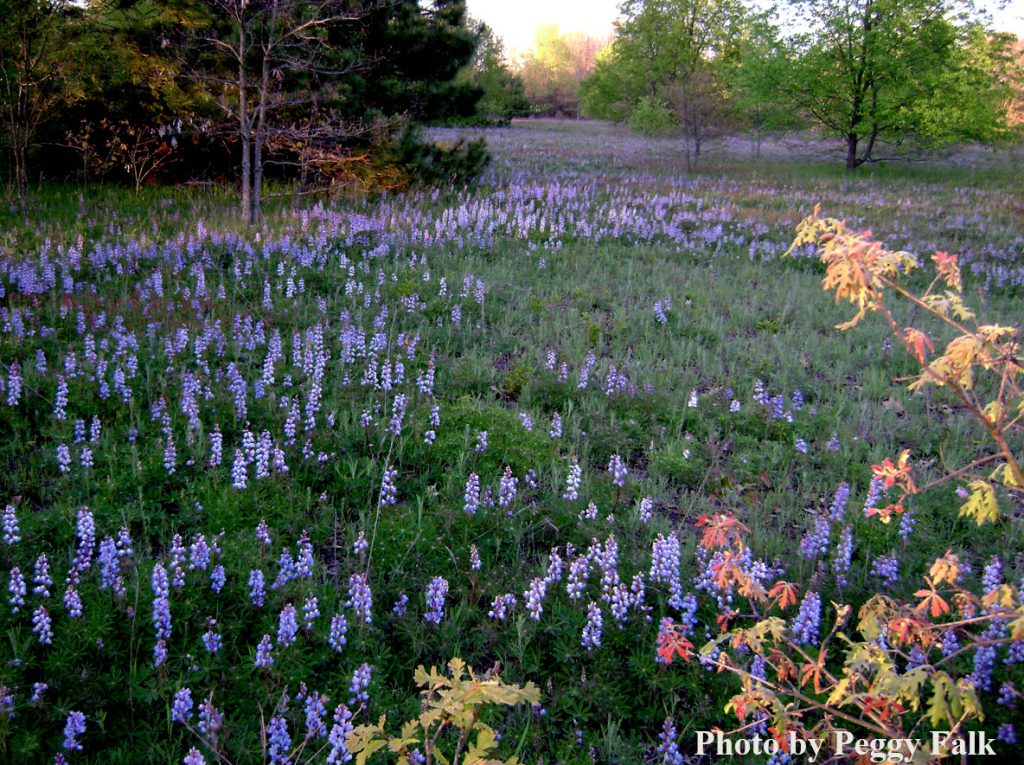 What happened to our prairie savannas?

Most of the prairies and savannas were converted to logged and converted to agriculture. If the soils were nutrient poor and prone to drought, people planted red pine plantations. Throughout Michigan, there are remnants of oak savannas, aka barrens, but they have since converted to forest due to fire suppression. Many of our old fields never convert to forest because they become over run with invasive plant that do not allow native trees, let alone native wildflowers and grasses grow.

After the removal of brome grass (invasive) in this field, a seeded/planted prairie was established. Images are of Saul Lake Bog (Grattan Township, MI) 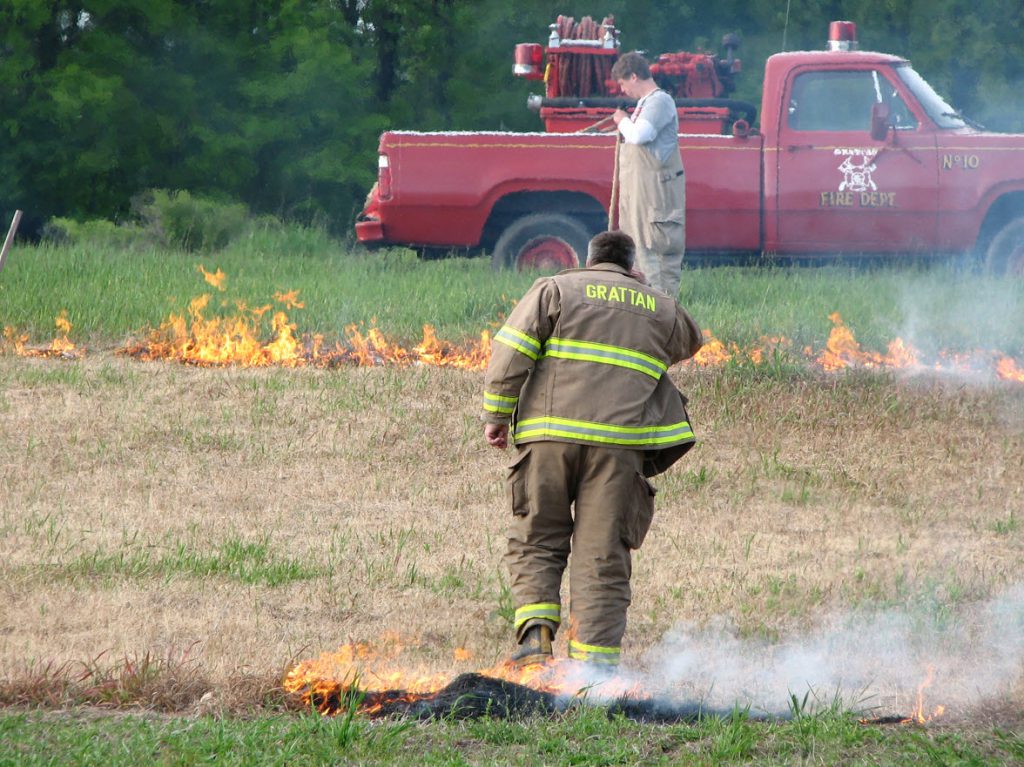 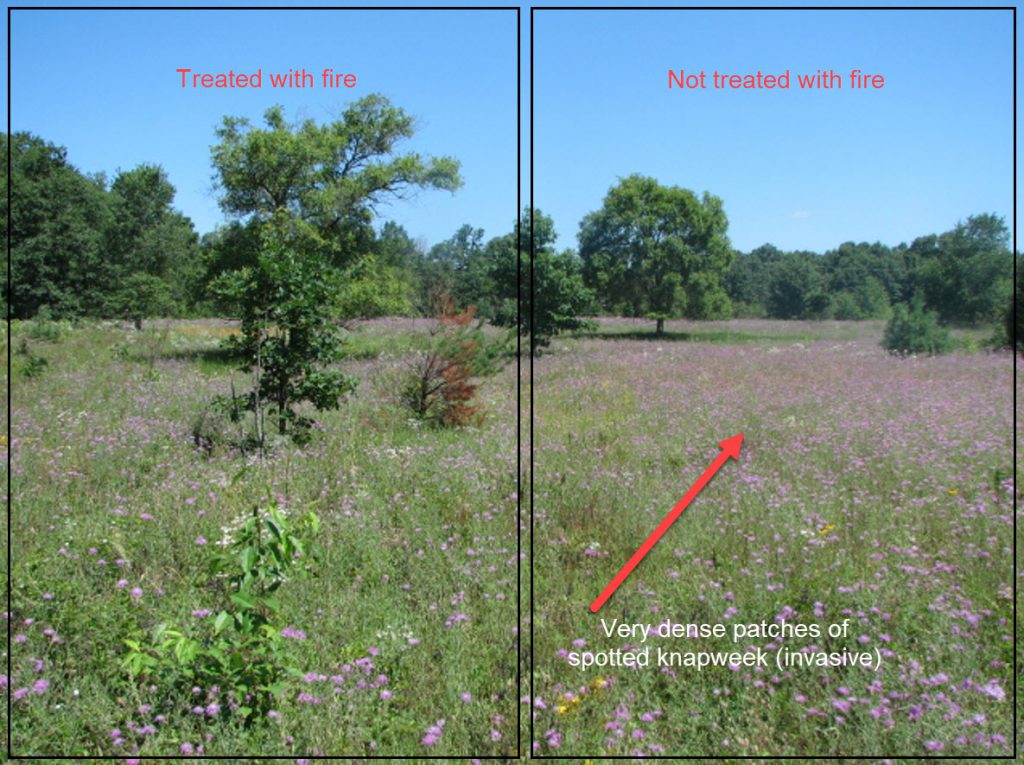 You can see the difference between the two sides of these fields. The left was treated with fire and the right was not.

On the contrary, fire can be restorative for our native ecosystems. In southwest Michigan, many of our landscapes and the wildlife who inhabit them, rely on wildfire to survive. Wildfire is naturally occurring but because uncontrolled wildfire is dangerous, we have become very good at suppressing it. While beneficial for society, suppressing a natural process is tough on wildlife who thrive in a habitat dependent on flames.

The idea behind a prescribed fire is to re-create this process in a safe and controlled manner.

A forest burn is different than other types of controlled burns. For example, in 2015 we utilized prescribed fire in the prairie at Hemlock Crossing Park to remove invasive plants and open up the seedbank to plants and wildflowers that weren’t present. When burning a mature forest, the same plants and trees are expected to return. The same species of tree are more attractive to some wildlife in their youthful shrubby stage. As the forest matures and grows dense, it pushes out wildlife that is adapted to young forest. Having both mature and young forest present increases biodiversity.

What about the animals who live there now?

Animals living in this habitat are adapted to fire and instinctively know to fly, burrow, or scatter from the flames. A forest burn is also a very slow burn, giving wildlife plenty of time to seek safety. We are careful to schedule our burns before most birds have nested. Wildlife returns quickly.

Prior to prairie burns, which usually move faster, staff and volunteers search the forest floor for slower moving animals, as well as those who are already rare due to a lack of habitat. If any of these animals are found, they would are removed and replaced following the burn. 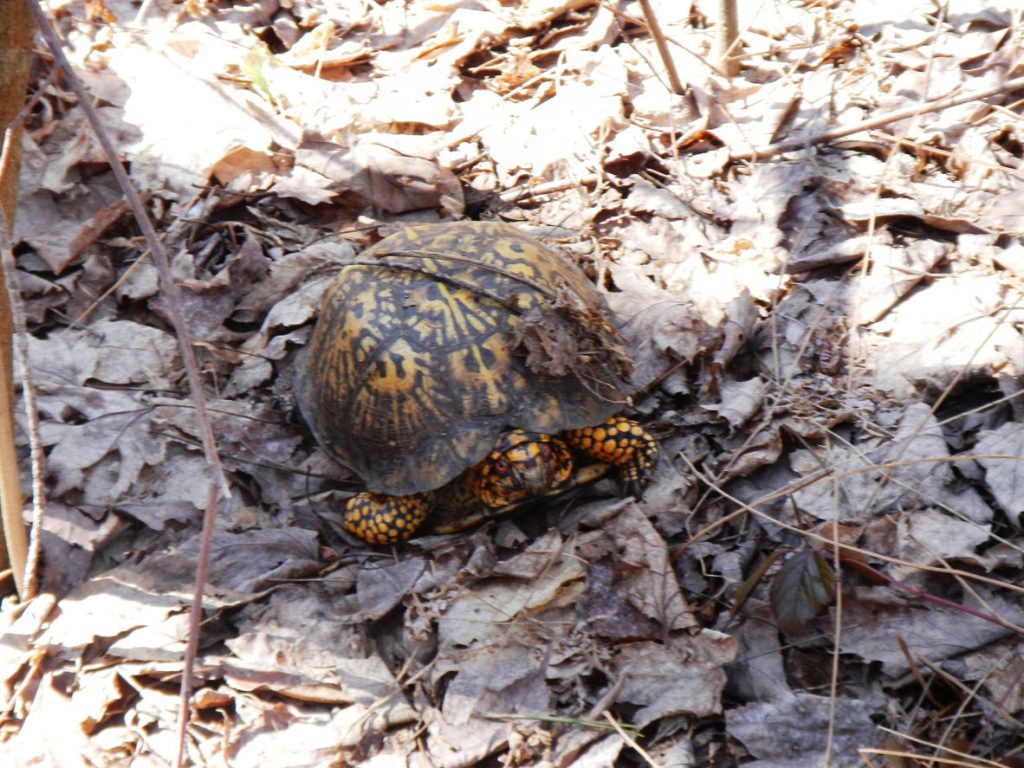 Eastern box turtles rely on habitats supported by fires. Without these habitats, the species could not survive. Because they are already a threatened species (generally due to lack of habitat), great care is taken to not harm them during a fire.

Does this really work?

After clearing out red pines from Port Sheldon Natural Area in 2009, a diverse batch of young trees such as red and sugar maple, beech, black cherry, and oaks grew up in thickets. Several special birds who hadn’t been sighted in the county for years returned to the young forest. Since the prescribed fire was a success, it was re-cleared with fire in the spring of 2016. Re-clearing their habitat ensures they will continue to call the PSNA home.

Visiting the restored prairie outside of the Nature Center at Hemlock Crossing is a great way to see just how quickly wildflowers and other species grow and bloom following fire.

The photo on the left is from April 26, 2015, the day of a prescribed fire. The photo on the right is from May 13, 2015, just a few weeks later. Wild lupine is not only growing, but already flowering! 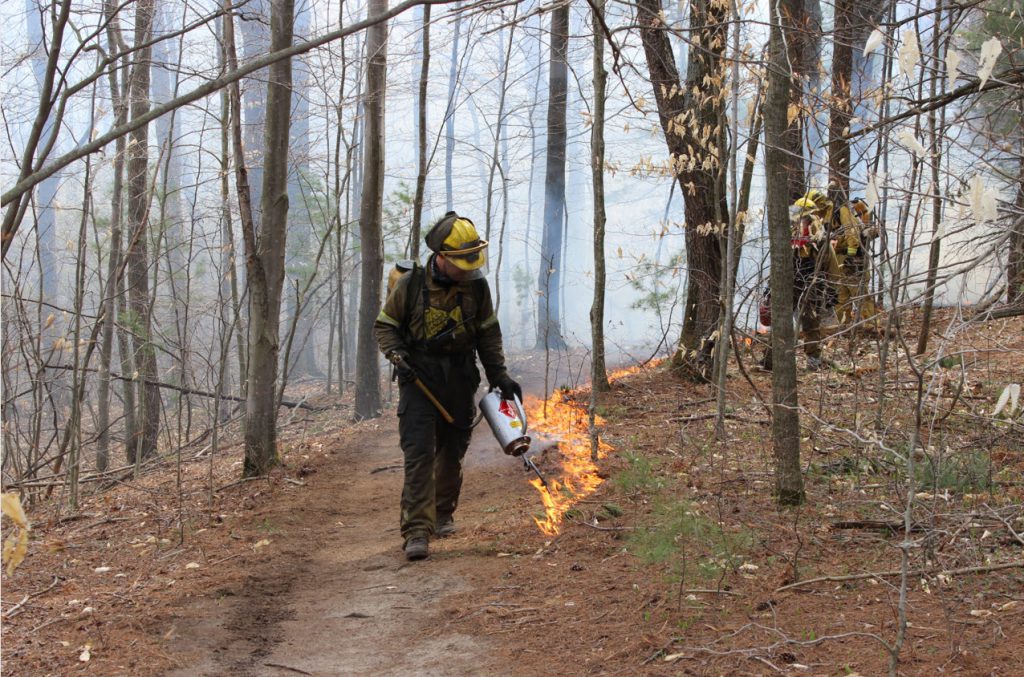 Burns are taken very seriously. If any one organization has a loose fire, the entire state can lose its ability to use prescribed fire for ecological purposes.

Burns range in complexity. Prairie fires are considered less complex than a forest burn; air currents created by the burn, can take ignited leaves outside of the burn unit and start a spot fire. Burn breaks such as mowed turf, trails, or even asphalt are key to a safe and successful fire. We also develop a prescription which uses science to determine what weather, and burn design will work best to safely achieve the management goals. 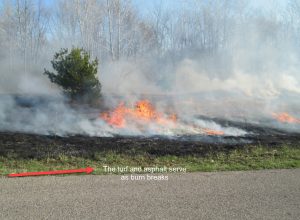 Burn crews work only within specified areas, and individuals are outfitted not just with a drip torch, but also a pressurized water pump and sprayer to manage the fire. Things like stumps and large trees are always avoided as they could burn for an extremely long time and could create too large of fires. 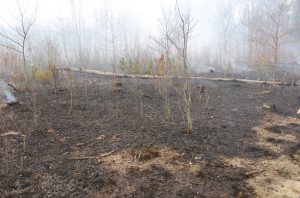 One of the most serious common and serious issues with a fire is smoke management. Our prescription call for days that either bring the smoke straight up like a high pressure day or in a direction that takes it away from sensitive infrastructure. One issue is to get the best fire effects (most wildflowers, least grass domination and most impact on invasives) burns are best done in late spring. However, this is also the time in which things begin to green up, which leads to more smoke.

Another big consideration is clean up or mop up. Many of our sites that are old pine plantations that have dead logs and stumps. These can be hazardous and can burn for days. Areas that have been burned are checked for many days following a burn to be sure the fire has been fully extinguished. 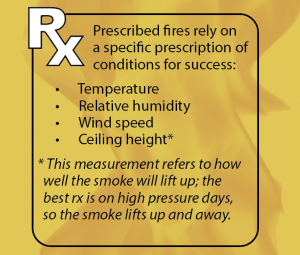