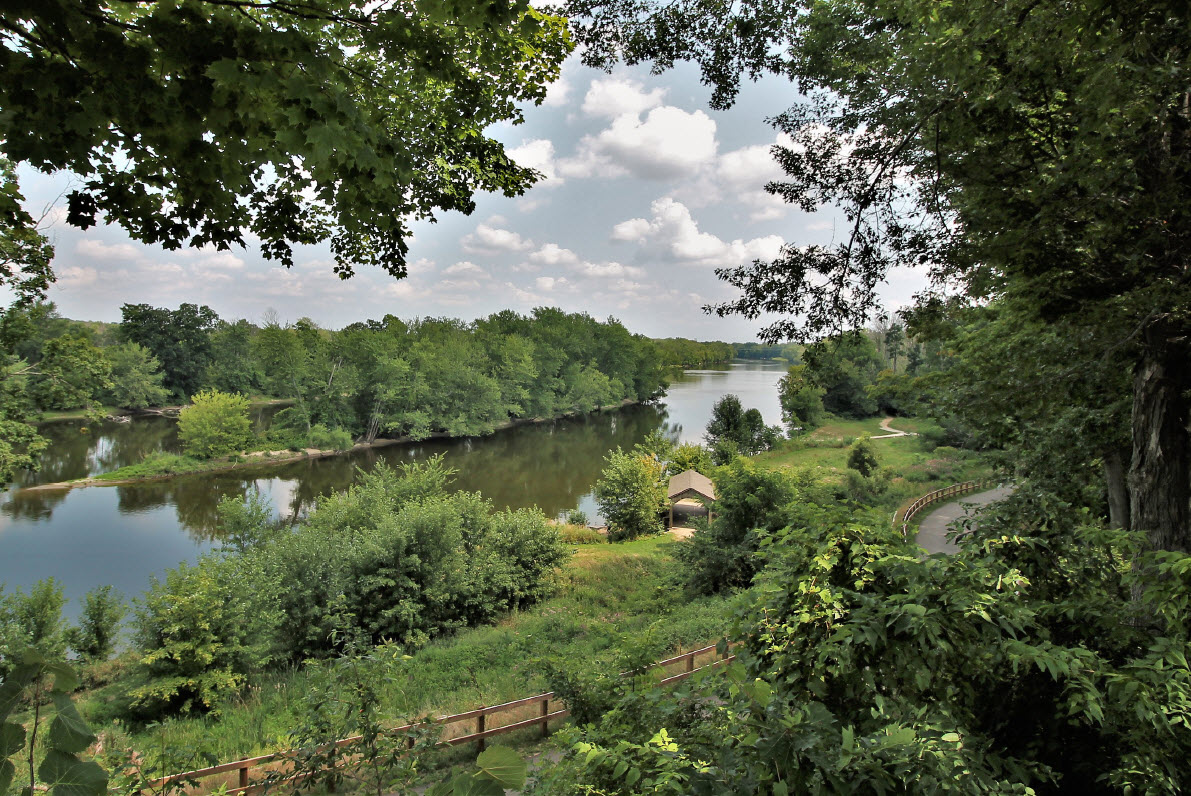 The Michigan Recreation and Park Association (mParks), an organization dedicated to the advancement of public spaces, recreation and natural resources, has announced that Ottawa County Parks has been awarded the 2018 Park Design award for Grand Ravines! Park Design projects typically contain landscape and facility components, such as splash pads, playgrounds, and trails and linear parks.

The award application included a narrative describing the park’s natural features and constructed amenities, such as the renovated lodge, 21-acre dog park, universally accessible kayak launch, restored barn, and 275′ suspension bridge. It also included photos of the site (maximum of 10 allowed with the application), many of which were contributed by park users and local photographers. A special thank you to David Michael Lawson, Lee Koets, Mike Lozon, Robert Woonacott, and Blair Celano, whose photos were included in the application and no doubt helped us achieve this honor. We appreciate you sharing your work with us! Scroll to read the narrative and see the photos included in the application.

The Park Design Award will be presented to Ottawa County Parks staff on Friday. February 1, 2019 at the mParks Conference & Trade Show in Kalamazoo, Michigan. The event will begin at 9:00 am. Entry to the Closing Session is public, but a ticket is required for breakfast. Tickets are included in the Full Delegate package or available for $35.

Photos included in the award application: 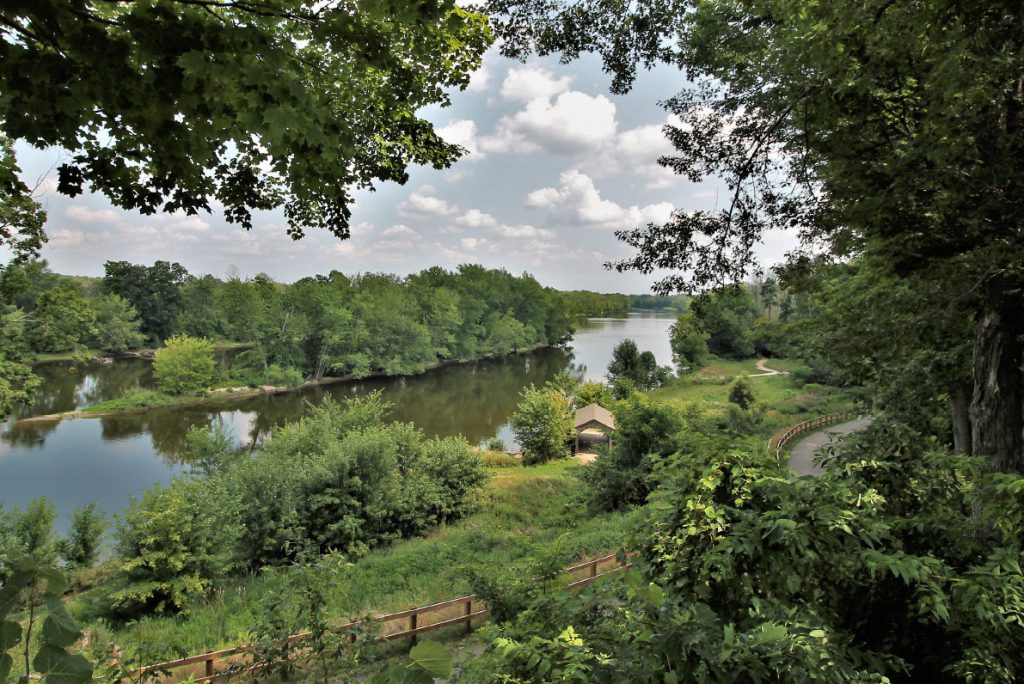 A view of the Grand River, covered bridge, and Idema Explorers Trail from the renovated lodge. Photo by Mike Lozon. 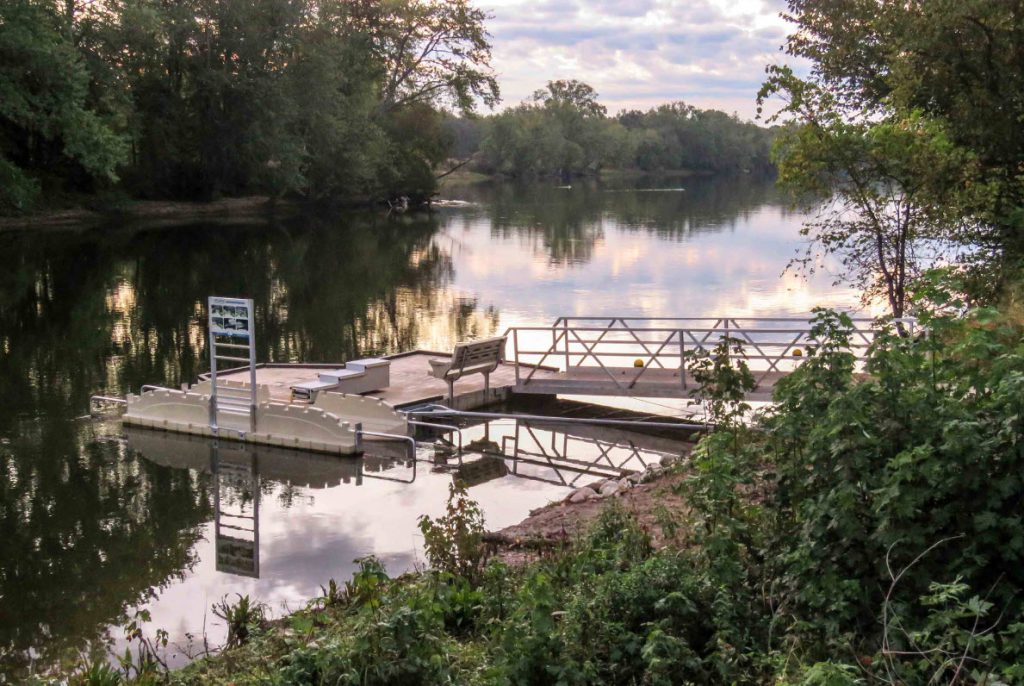 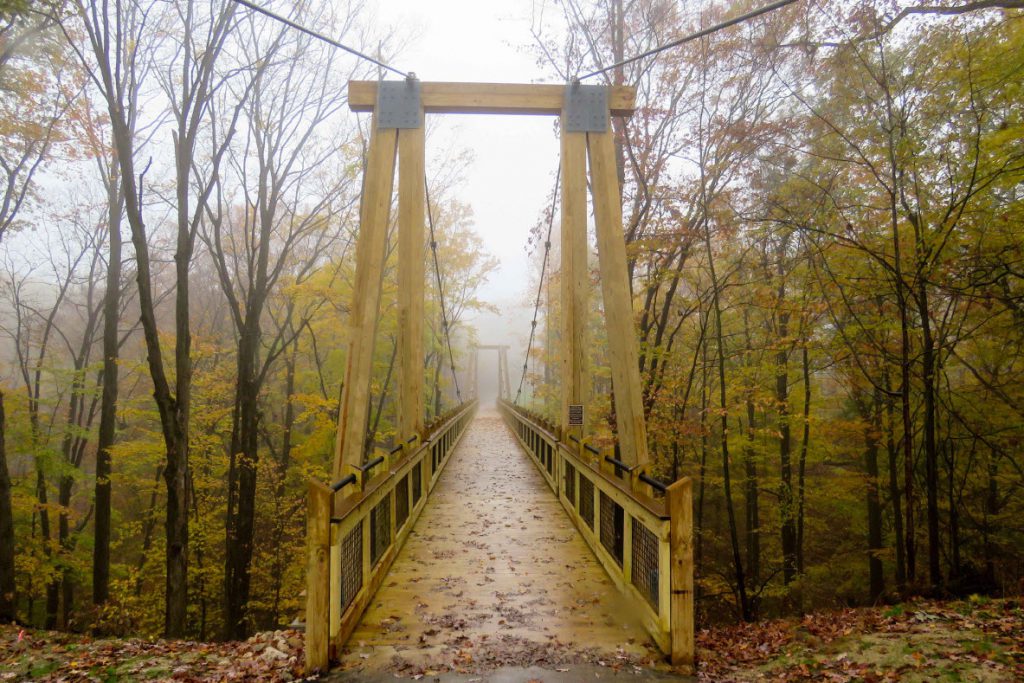 275’ long, 70’ high suspension bridge traversing one of the park’s namesake ravines. The bridge is fully ADA accessible and is believed to be the longest pedestrian suspension bridge in Michigan. It was funded in full by a private donor, Bea Idema, in honor of longtime Parks supporters, Ray and Alma Statema. Photo by Lee Koets. 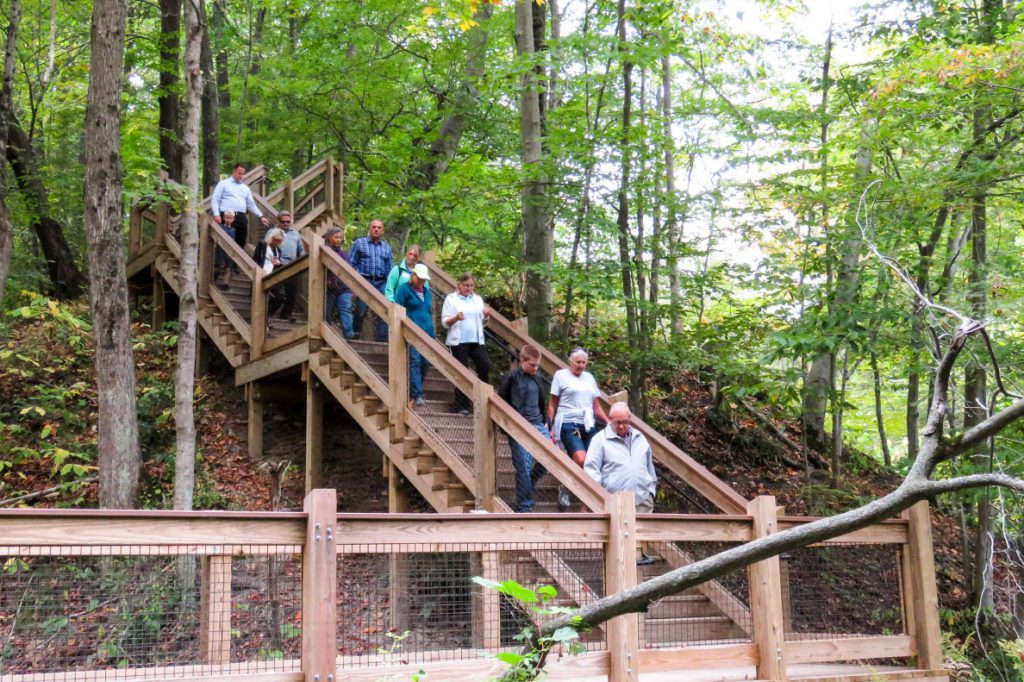 Staircase through the forest, constructed on a donated easement to connect the trails through the ravines. Photo by Lee Koets.

The county park system’s first dog park is 21-acres and includes two play areas for all dogs, a play area for small dogs, and fenced off-leash trail. The park is free to the public and is enjoyed by residents and visitors from near and far. Photo by Mike Lozon. 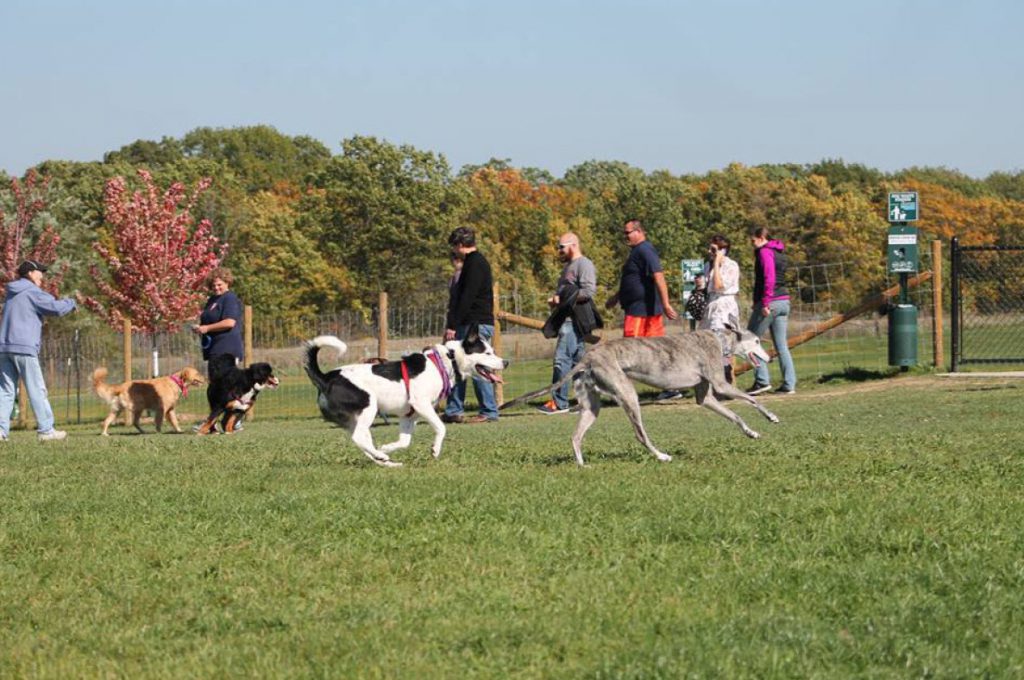 The county park system’s first dog park is 21-acres and includes two play areas for all dogs, a play area for small dogs, and fenced off-leash trail. The park is free to the public and is enjoyed by residents and visitors from near and far. Photo by Robert Woonacott. 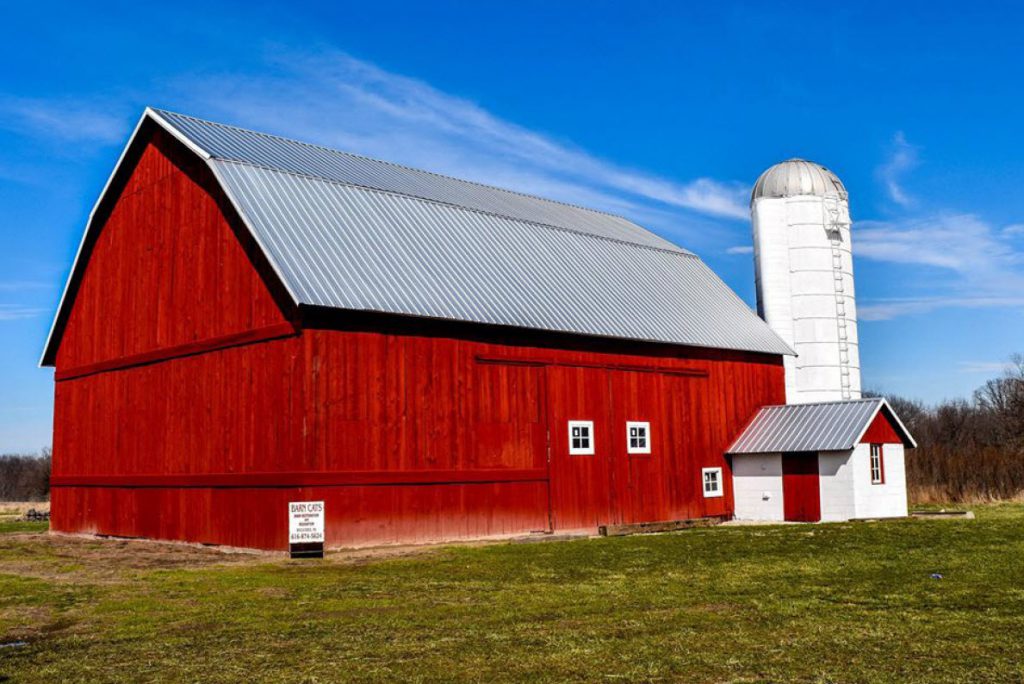 A historic barn on the property was renovated and is incredibly popular for family photos. It also serves as a landmark for the south entrance of the park as it is very visible from the road. Photo by Blair Celano. 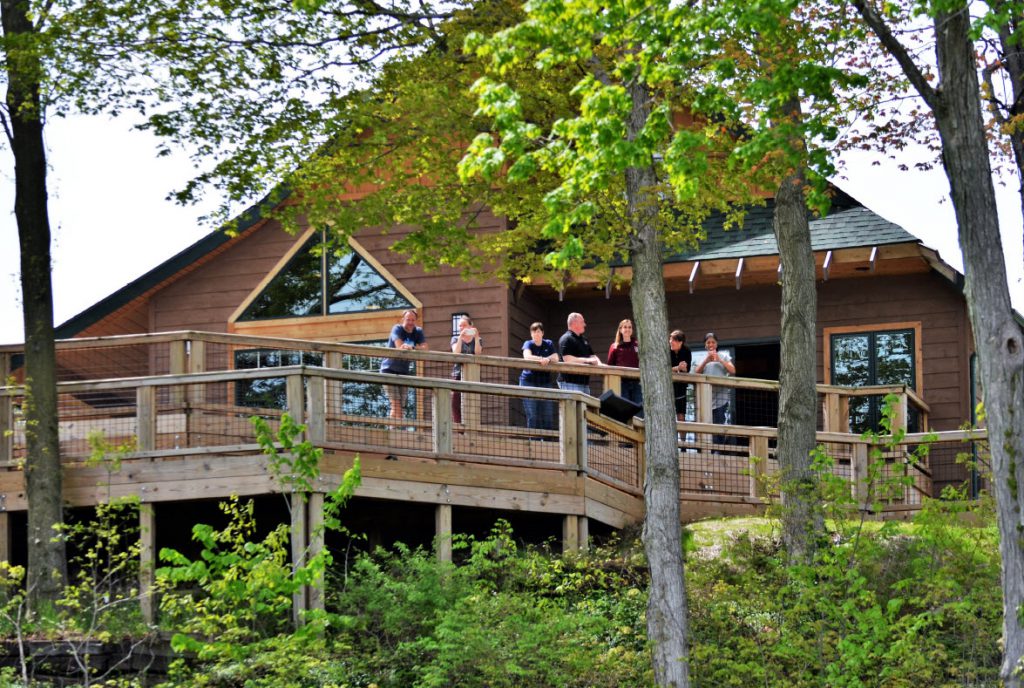 Renovated Grand Ravines Lodge and deck. This facility was the home of the former owner. It was renovated into a facility available to the public for rental. Photo by Mike Lozon. 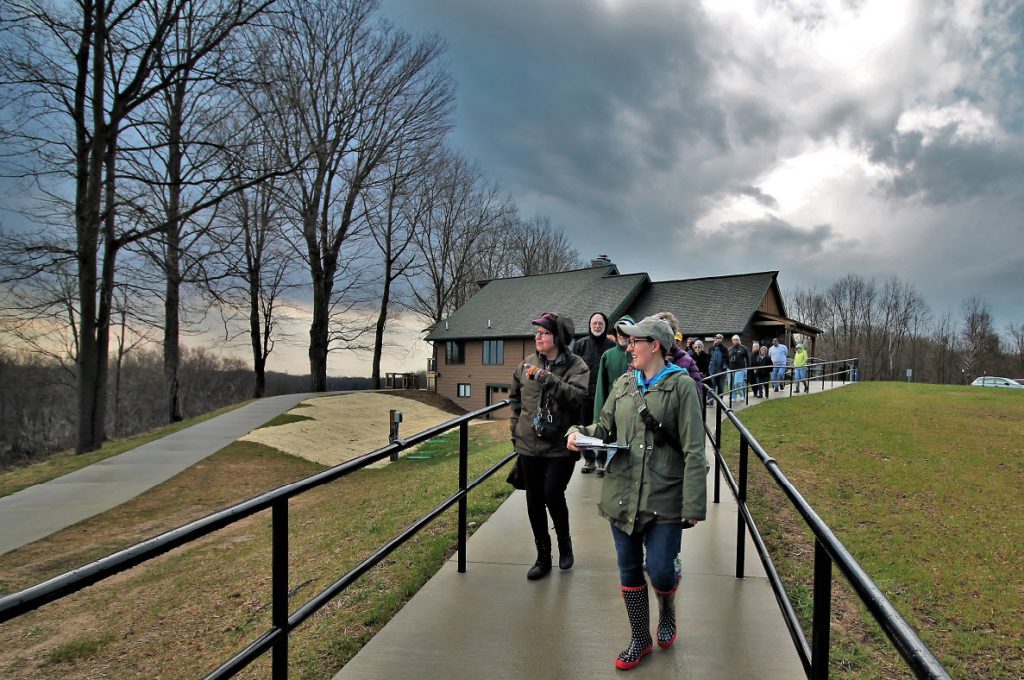 The lodge also serves as a satellite Nature Center for interpretive programming for residents on the east side of the county. Photo by Mike Lozon. 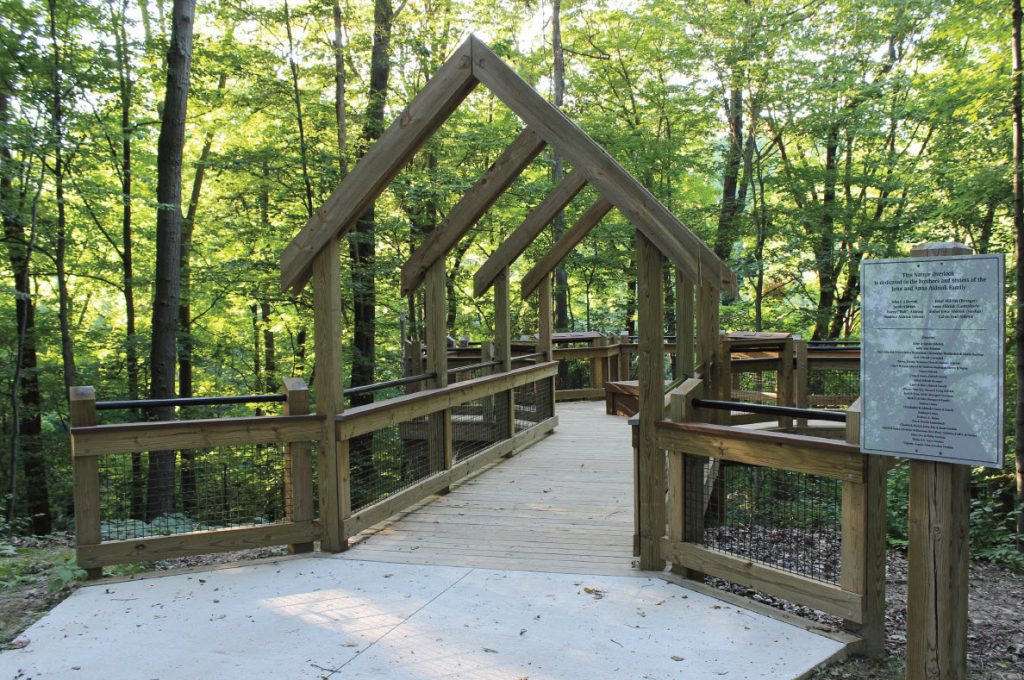 Fully accessible ravine overlook, 40′ long and nearly 100′ from the ground along the Idema Explorers Trail route. 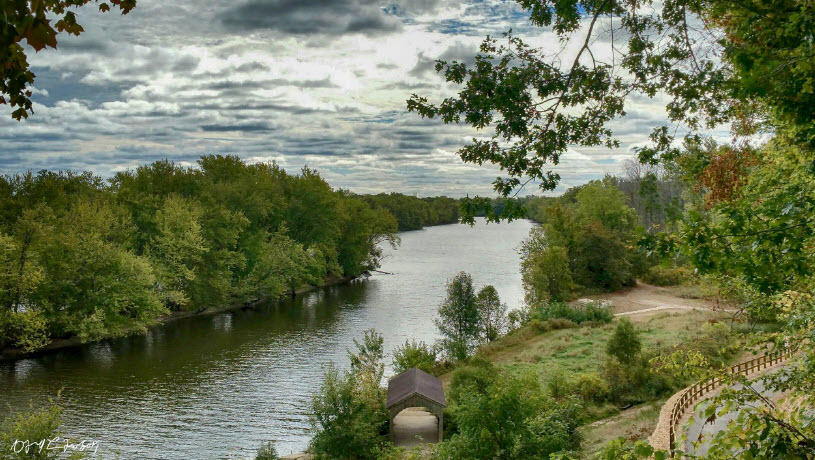 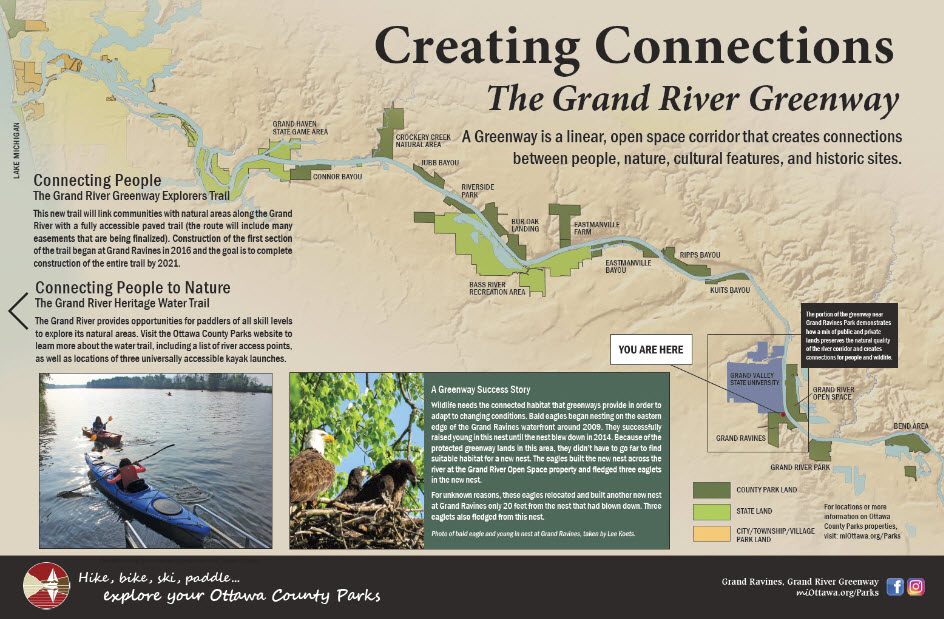 Grand Ravines is located on the edge of Georgetown Township, Michigan, adjacent to Grand Valley State University’s (GVSU) main campus in Allendale Township. All of these entities have seen tremendous growth in recent years, and it is anticipated to continue in the foreseeable future. The 2010 U.S. Census reports that Allendale Township is the fastest-growing municipality in Ottawa County, with a 58.8% increase in population from 2000-2010 and an estimated additional 25% increase from 2010-2017. Georgetown Township is projected to see growth of 23% through 2030. Because of the rise in population, there is an increased demand for greenspace and natural recreation areas. Grand Ravines’ close proximity to neighboring Kent County and the City of Grand Rapids allows it to serve their growing populations as well.

In 1988, a county-wide natural features inventory identified this area as having one of the most significant natural features in Ottawa County: a substantial system of deep ravines that extends not only through the park, but also into adjoining riverfront property owned by GVSU. These deep ravines feature unique plant communities, including a variety of ferns and trees uncommon to this area, such as Kentucky coffee-trees, pawpaws, and towering tulip trees.

The park property was acquired in three sections. In 1999, the southerly 68 acres of the park was purchased with funding from the county park millage. The adjoining 100-acre portion, including the former owner’s residence which overlooks the river, was purchased in 2011 with assistance from a Michigan Natural Resources Trust Fund grant. Later that same year, upstream Grand River frontage was added to establish the 19-acre section of the park known as the John J. Helstrom Natural Area.

With critical property purchases in place, formal master planning and design work began in 2014. This process was conducted solely by Ottawa County Parks’ staff and included site analysis, several public meetings, conceptual design, cost estimating, and phasing plans. A major goal for the plan was to provide appropriate public access to the impressive ravine system while protecting this unique and somewhat fragile resource.  An extensive, yet sensitively sited system of paved and natural surface trails was proposed along with bridges, stairs, boardwalks, and overlooks to provide a variety of experiences for park users. The master plan process also revealed a desire by the public to renovate an old barn near the south entrance to the park which had become a popular landmark and photography site. Other major elements incorporated into the plan were the County’s first off-leash dog park, renovation of an existing home overlooking the river into a rental facility (now known as the Grand Ravines Lodge), paddle access improvements on the riverfront, as well as required support facilities including parking and restrooms.

As an initial act of stewardship, 12 acres of field formerly used for agricultural purposes were restored to native prairie and grassland in 2014. Major improvements to the park began in 2015, including the restoration of its historic barn and initial construction of the dog park, a 21-acre area of fenced dog play spaces and trails. The entire park, including the dog park, is free for the public to use; because of this, its size, and location, the dog park has drawn a large amount of support from the community, receiving $20,000 from a local pet store, Chow Hound Pet Supplies, and $10,000 from the Hudsonville-Jenison Community Foundation.

Other improvements that were completed in 2015 include the addition of trails, stairways, entrance gates and signage, and the renovation of the former residence overlooking the river. The Grand Ravines Lodge opened as a secondary base of operations for interpretive programming and is also used as a rental facility, quickly becoming a popular location for weddings, business meetings, family gatherings, and more.

Also in 2015, a ravine overlook was constructed with funding from private donations from the family who previously owned a portion of the property. The wooden structure features views over a beautiful, nearly 100’ deep, forested ravine.

Additional significant improvements began in 2016.  With funding assistance from a Land and Water Conservation Fund grant, accessible pathways to connect the north and south portions of the park, as well as to the riverfront were also completed in 2017. The section of pathway leading to the Grand River is a key segment of the Idema Explorers Trail, a regional non-motorized pathway that, upon completion, will connect from Grand Rapids to Grand Haven and to an additional 8,500 acres of public land along the way.

A new, universally accessible kayak launch and fishing dock on the Grand River were also added to the north side of the park in 2017, making Grand Ravines a significant stop on the Grand River Heritage Water Trail. The water trail stretches 34 miles from the border of Ottawa and Kent Counties to Lake Michigan, with multiple public landing points.

As a fitting conclusion to several years of construction, a 275′ long, 70′ high suspension bridge traversing one of the park’s namesake ravines was completed in time for a fall 2017 park dedication. The bridge is fully ADA accessible and is believed to be the longest pedestrian suspension bridge in Michigan.

Construction costs for the Grand Ravines including all the phases listed above totaled $3,639,500.

Although Ottawa County Parks had budgeted over $1.25 million for a first phase of improvements, early success and demand for additional facilities required adjustments to Park System’s budget priorities as well as a search for other sources of funds. To an extent unprecedented by Ottawa County Parks’ history, over $785,000 was collected in private donations to aid in the construction of park facilities.

The significant topography of the site created challenges in providing barrier-free accessibility. Park staff took two approaches to address this concern.  First, easement agreements were reached with two adjacent property owners to allow the trail to traverse out of park boundaries to go around ravines or into more readily accessible areas. Second, unusual engineering solutions to provide accessible trail were explored. These eventually lead to the construction of a suspension bridge and connecting paved trail, as well as a 500’ long retaining wall supported sloped walkway that allows barrier free access from the bluff overlooking the river to the riverfront itself.

Through all of the construction and development, the park remained home to a nesting pair of Bald eagles who hunt along the Grand River. They often perched in a sycamore tree near the lodge and were visible from the deck and trail, much to the delight of park visitors. State and federal regulations prohibited construction activities within a certain distance of their nest, creating inconveniences for contractors, however, the work was eventually completed with apparently no effect and the popular birds.